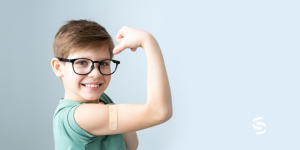 If you have a school-aged child, it’s almost their turn for a COVID-19 vaccination, and you may have questions. Here are the answers.

UPDATE: On October 7, 2021, Pfizer confirmed that it is working with Health Canada on the final steps before it makes a formal request for its COVID vaccine to be authorized for use on kids ages 5 to 11, which it expects to do in mid-October. This comes after an announcement on October 2 that the vaccine manufacturer had submitted its paediatric study results to Health Canada.

When the COVID-19 vaccine became available to teenagers in Canada back in May of 2021, many parents rejoiced. After all, being vaccinated is highly protective against the nasty virus, which has now taken the lives of more than 27,000 people in Canada, and infected more than 1.5 million of us. Widespread use of the vaccine is also a key element of the larger plan to end the pandemic.

But now that it’s almost time for younger kids the get the COVID-19 vaccine, parents have questions. Here are some answers.

What do we know about the safety and effectiveness of the vaccine in kids aged 5 to 11?

At the moment, only one vaccine manufacturer, Pfizer, has discussed the results of its studies on how the vaccine works in school-aged kids.

In a press release published in September 2021, the company said that its trials showed the vaccine had a “favorable safety profile” and “robust neutralizing antibody responses” in children aged five to 11. Put simply, it was found to be highly safe and effective in that it created the necessary antibodies, just as it does in adolescents and adults. It was also well-tolerated as far as side effects—no new side effects were identified. Such good news!

Will kids need one vaccination or two?

Parents of needle-phobic little ones will inevitably be wondering if their child will need one shot or two. Kids are small and light, so do they really need two doses?

Pfizer said that in its study, which was conducted on 2,250 kids aged five to 11 years, kids received two needles administered three weeks apart. It’s worth noting that the dose given was a third of what teens and adults received—10 micrograms per shot as opposed to 30 micrograms.

It remains to be seen if other vaccine manufacturers are developing shots that can be administered in just one dose.

Why is the dosing based on age, not weight? What if my child is heavy for their age?

With most medications, weight plays a big role in dosage. But that’s not the case for vaccine doses. “This is because your immune response is not weight dependent,” explains Sabina Vohra-Miller, the Toronto-based founder of Unambiguous Science, a platform that aims to make science accessible to Canadians. Instead, researchers look for a dose that creates a strong immune response in that age group while minimizing side effects.

When can we expect the vaccine roll-out for kids in Canada to begin?

While some experts, including B.C. provincial health officer Bonnie Henry, are predicting the vaccine could be available for five- to 12-year olds by the end of October, it really depends on how quickly the next few steps can happen.

Pfizer must first formally submit the results of its trials to government regulators, which it says it will do shortly, although it hasn’t given a specific date. “We are pleased to be able to submit data to regulatory authorities for this group of school-aged children before the start of the winter season,” says Ugur Sahin, CEO and co-founder of BioNTech, which partnered with Pfizer to create the groundbreaking vaccine.

Once the data is in the hands of Health Canada, it could be mere weeks or several months before it is approved and the roll-out begins. Previously, Health Canada moved quite swiftly to authorize the use of the vaccine in teenagers after receiving clinical study data.

What are the vaccine’s side effects in children?

Pfizer reports that in the study, the vaccine’s side effects in kids were similar to the side effects seen in teens and adults.

According to the World Health Organization, reported side effects to COVID-19 vaccines have mostly been mild to moderate and short-lasting. They include fever, fatigue, headache, muscle pain, chills, diarrhea and pain at the injection site. More serious or long-lasting side effects to vaccines are possible—but extremely rare.

You may have read about myocarditis (inflammation of the heart muscle), and pericarditis (inflammation of the outer lining of the heart) occurring after an mRNA COVID–19 vaccination. In Canada, there have been “a small number” of these reports, according to a report from SickKids hospital in Toronto. As of September 11, 2021, there have been 369 reports of myocarditis or pericarditis after the COVID-19 mRNA vaccines in Ontario, out of the more than 21 million doses received. The symptoms of these conditions include chest pain, shortness of breath and feelings of having a fast-beating, fluttering, or pounding heart, and are more likely to occur after the second dose. Adolescents who developed myocarditis or pericarditis after their vaccine generally experienced mild illness, responded well to conservative treatment and rest, and their symptoms improved quickly, says SickKids.

Do kids truly need the vaccine?

Since early in the pandemic, parents have been assured that when kids contract COVID-19, it’s almost always a mild illness, and that serious illness and death are extraordinarily rare. This led many parents to believe that vaccinating kids against the virus was unnecessary.

But according to Health Canada, although kids are less likely than older adults to get very sick from COVID, they can still get sick, and some will become very sick and could require hospitalization. Hospitals in the United States have seen paediatric admissions surge with the Delta variant and now that schools are open in Canada many experts worry about a similar situation occurring in Canada. There’s also a very real concern about infected kids experiencing longer-term effects, known as “long COVID.”

It’s also worth remembering that kids with COVID, even if the case is mild or asymptomatic, can spread the virus to others. Many experts believe that, because of the Delta variant, to achieve herd immunity, we need almost everyone in the country vaccinated, including children.

Should any kids avoid the vaccine?

Anyone who has had a severe allergic reaction to any ingredient of the Pfizer vaccine should not get the vaccine, according to Pfizer, but speak to your healthcare provider if this is the case for your child.

What about kids younger than 5?

Pfizer says that data on the other two age cohorts from its trial—children 2 to 5 years of age and children 6 months to 2 years of age—is expected to be released before the end of the year, perhaps as early as October.